Neddie (N/ina and Eddie) is the friendship or otherwise romantic pairing of Nina Martin and Eddie Miller. Eddie showed interest in Nina when he first came to Anubis House, because she was one of the only people who was nice to him. He had also been interested in her because of her American accent, as he has been only hearing British accents. Also, he was seen flirting with Nina when he arrived as well. Nina pretended to like Eddie because of her bad break up with Fabian, so she wanted to make him jealous.

Eddie is Nina's Osirian, or counterpart, and is supposed to be protective of her and may begin the start of a relationship and it's supposed that they they have a special connection. In Season 3, Nina did not return because she says that The Chosen One and the Osirian have to be kept apart. Nina only tells Eddie, but gives him a letter to transfer to Fabian to let him know about her departure.

This pairing is unlikely to advance romantically because Nathalia Ramos, Nina's portrayer, had left the show due to school and Nina was dating Fabian and Eddie is dating Patricia. Eddie had lost his Osirian powers in The Touchstone of Ra, so Nina could likely return if she wanted to.

Click to view the Neddie Gallery, Fanfiction, and Society pages. 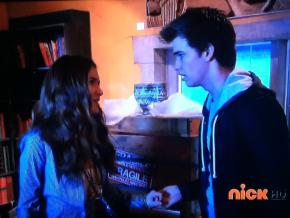 House of Who? / House of Frauds

House of Sibuna / House of Payback

House of Silence / House of Warnings

House of Collections / House of Speculation

House of Reflectors / House of Illusions

House of Traps / House of Stakes

House of Arrivals / House of Presents