Nathalia Ramos started her acting career with her role of Hope Loblaw in Arrested Development. Later, her career continued as the actress began to audition for bigger Hollywood films, gaining roles such asYasmin in Bratz: The Movie, later joining Nickelodeon by guest starring as Dakota North in True Jackson, VP; as well as becoming a lead role in Nickelodeon's most-viewed live action soap-opera of 2011-2013, hit mystery/drama series House of Anubis, portraying the role of Nina Martin, a new American student who attends a British Boarding School during the period of time when one of the students, Joy Mercer, goes missing.

Due to the fact Nathalia had to choose between finishing college and continuing filming the hit show House of Anubis, she chose education and left the series between the end of season 2 and the beginning of season 3.

More to the point, her career didn't end just yet - Nathalia continued being a college student but as well didn't leave acting.

In 2013, Ramos continued her acting journey by joining Resident Advisor, as well as being part of 2014's highest rated horror film The Damned, portraying the lead role Jill Reynolds.

The motivation to become a professional actress didn't leave Nathalia just yet. In 2016, Nathalia starred in the psychological thriller Wildflower: The Movie, where she plays the role of Chloe Moray, as well as new music coming soon. 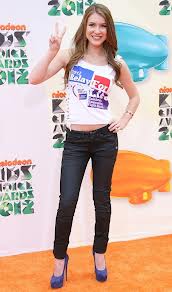 Retrieved from "https://the-house-of-anubis.fandom.com/wiki/Nathalia_Ramos?oldid=415552"
Community content is available under CC-BY-SA unless otherwise noted.